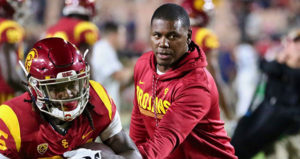 The Kansas City Chiefs announced on Friday that the club has hired Deland McCullough as Running Backs Coach. McCullough joins the Chiefs from USC where he coached the Trojans running backs.

“Deland has a track record of success teaching young running backs and he’s also played in this league,” Chiefs Head Coach Andy Reid said. “I enjoyed the time I spent getting to know him and believe he will be a very good addition to our coaching staff.”

McCullough joins the Chiefs after spending the 2017 season at USC as the Trojans Running Backs/Running Game Coordinator. Prior to his stint at USC he spent six years coaching the running backs at Indiana University. He also served as the Hoosiers’ Special Teams Coordinator-Return Units Coach in 2016. At Indiana, he mentored three future NFL running backs in Stephen Houston, Tevin Coleman and Jordan Howard. Prior to his stint at Indiana he worked as an offensive and special teams intern with Miami (Ohio) where he played running back as an undergrad. He played in the NFL with the Cincinnati Bengals (1996-97) and Philadelphia Eagles (1997). He also played professionally with the CFL’s Winnipeg Blue Bombers (1998-99) and the XFL’s Chicago Enforcers (2001).

#HealthTipTuesday How Do I Get a Flat Stomach?

August 20, 2019 missourimag Health, Trending Comments Off on #HealthTipTuesday How Do I Get a Flat Stomach?

Struggling to get a six-pack, yet alone abs in general? You’ve come to the right place. Losing the fat around your midsection is a goal a lot of us share when we start our health […]

One lucky fan will win a ride in the Lucas Oil 2-Seater Late Model at the Rempfer Memorial Season Championship Program on August 24. (Kenny Shaw photo) What’s it like to make laps around “Diamond […]